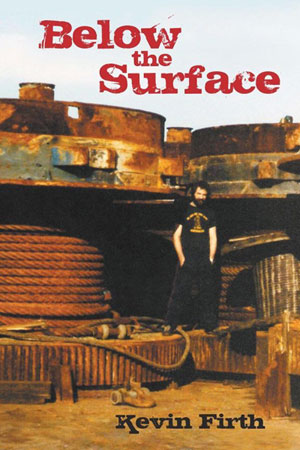 For signed copies, please email me

Over the last ten years or so, from time to time I have put pen to paper recalling adventures from a different time that even I have difficulty believing actually happened, In particular my time at sea. Joining the British Royal Navy at the tender young age of 15 and traveling extensively around the world one would expect an adventure or two. After, ‘too many’ years in the Navy came the deep sea diving, working the oil fields off the shores of Scotland and Newfoundland. After reading this you will probably be no more surprised than I that I am still here to tell this tale. It is an auto-biography however I am guilty of cherry picking all the good and very bad stuff. I have laughed my ass off while writing this only to find myself close to tears a few paragraphs later. ‘Below the Surface’ is now available.

Below the Surface is an adventure memoir detailing my experiences as a commercial mixed gas deep sea bell diver in the North Sea during the mid-1970s.

The book captures the harrowing and near-death experiences I survived at the very bottom of one of the world’s coldest bodies of water.

My story begins with a sometimes violent childhood in 1950s working class northern England. Brought up by two deaf parents, my siblings and I found resourceful ways to cope with poverty in this bleak industrial landscape.
Yearning for more, I joined the Royal Navy in 1967 at age fifteen. This is where I learned my trade and began a lifetime of living at sea. But the thrills of this new world were met with the challenges of loneliness and disconnection from family.

Emigrating to Canada in the mid-1980s, I found myself working on one of the most challenging jobs anyone could face: bringing up the famed Ocean Ranger oil rig from its untimely place of rest. The largest floating oil rig in the world sank in the exploratory oil fields off the grand banks of Newfoundland. These tumultuous waters have taken many famous ships to an early grave, the Titanic being the most famous. Many similarities exist between the two vessels, but with the Ocean Ranger, no one survived.

“Feel the riveting danger when things start to go wrong, as you experience what it might be like working deep under the North Sea. We are thrilled to announce the release of this exciting memoir,” said Robert Fletcher, CEO of Strategic Book Publishing and Rights Agency.

Below the Surface Images